Paine College Alumnus, Deonte Moses, has a new post at Duke University where is in a Masters program. Read about it here. 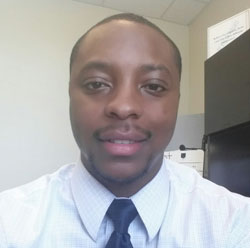 Jeffrey E. Pierce, II is a man with an unselfish will to exert compassion and a robust appetite for higher education. Encouraged to overachieve through the guidance of a strong set of unrelenting parents, the Atlanta, Georgia native had morality instilled within the modest towns of Florence and Darlington, South Carolina.

Mr. Pierce currently holds the position of Graduate Admissions Counselor at Albany State University where he continues to increase his knowledge and build upon his passion for higher education. He received his Bachelor of Science degree in Business Administration, with a concentration in Management in 2010 from Paine College.

Shortly after graduation, Jeffrey was introduced to his passion for higher education when he was offered and accepted a position to work as an Undergraduate Recruiter/Counselor for his alma mater.

The strong love for higher education prompted him to pursue a Master of Science degree in Higher Education, with a concentration in Institutional Marketing and Enrollment Management which he received in 2013 from Walden University. He is currently working on his Doctorate degree in Education from Columbus State University.

Jeffrey has been afforded the opportunity to give presentations at annual conferences as well as receive various awards highlighting his excellent customer service. He has also been quoted in an article providing expertise on key indicators that determine whether a student is ready to begin an advanced degree.

Promotions and advancements in his higher education career have contributed to his passion for the success of each student he encounters. His loyalty to the profession has forwarded him the opportunity to have a direct effect on changing the lives of individuals from all backgrounds which he continues to do today.

Jeffrey has a strong support system that includes his wife, Rachell Pierce, and their son Jace Pierce. 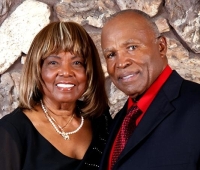 David and Betty Peterson: Working Together for Paine College

There is no better place than Paine College to prepare for your life's work. Betty and I are Paine College graduates and believe that students should have an opportunity to experience Paine College in a stimulating, safe living and learning environment. This is why Betty and I have chosen to support the College's initiative to build the Health Education Activities Learning Complex in the vicinity of Randall A. Carter Gymnasium.

Betty and I are retired educators and we have witnessed firsthand how education can impact the lives of youth and young adults. As we challenge our students to embrace the world with courage and objectivity, we must increase our offerings and provide the living and learning environment that will embody the mission and vision of the institution.

Betty and I agree that Paine College remains a sound investment. The rate of return on the HEAL Complex will far exceed our principal gifts. The construction of the HEAL Campaign will require the entire college community working together to support this historical initiative. It will transform the academic infrastructure, campus life, and physical plant and reposition the college's visibility throughout the state and the nation. As a former Paine College athlete, I am looking forward to cheering the Lions in the new arena.

We invite all Paine College alumni and friends to join Betty and me on this incredible journey to ensuring the future and sustaining the vision for Paine College to become the premier liberal arts college in the region.

Louis E. Lomax was born on August 16, 1922 in Valdosta, Georgia. His parents were Sarah Louise Smith Lomax and Emanuel C. Lomax, both of Georgia. As the nation entered the Second World War, Lomax chose to take a different route from many African Americans he knew. Instead of enlisting, Lomax entered Paine College in Augusta, Georgia. After completing his B.A. at Paine, Lomax left the South to pursue graduate studies. He received an M.A. in 1944 from American University, and by 1947, he had attained a Ph.D. from Yale University.

Louis E. Lomax is perhaps best known for his journalism and books. His commitment to the civil rights struggle of the 1960s is reflected in his work and should be considered a notable achievement for a journalist. Through his news editorials in such publications as the Baltimore Afro-American, the Chicago American, and Harper's, his impact on the movement continues. Of equal importance are his books: The Reluctant African, The Negro Revolt, When the Word Is Given: A Report on Elijah Muhammad, Malcolm X, and the Black Muslim World, Thailand: The War that Is, The War that Will Be, and his final work To Kill a Black Man. For his scholarly contributions and tireless effort in the human struggle for civil rights, Lomax should be counted among the notable African American scholar activists of his time.

Dr. Mack Gipson, Jr., was born in Trenton, South Carolina, on September 15, 1931. He graduated from A. R. Johnson High School in Augusta, Georgia, in 1949. In 1953, he earned the Bachelor of Arts degree in natural sciences from Paine College. He earned a Master of Science degree in 1961 and a Ph.D. in 1963 from the University of Chicago, becoming the first African American to receive a doctorate in the field of geology.

Dr. Gipson worked in a number of different jobs. For example, he served as the director of a special program for high school scientists, a project of the National Science Foundation. He also worked for several oil corporations such as Exxon, NLERCO Industries, the Aminoil Company, and Phillips Petroleum. Dr. Gipson started the geology department at Virginia State College (now called Virginia State University). He joined the faculty of the University of South Carolina as a professor of geology in 1986.

Dr. Gipson was the founder of the National Association of Black Geologists and Geophysicists. He served as a member of the National Academy of Science Study Group on Geological Training and Research in the Republic of Zaire. NASA commissioned Dr. Gipson to research the pyramids on the planet Mars. U. S. Secretary of Energy Hazel B. O'Leary appointed him to the National Petroleum Council.

Dr. Gipson received many honors during his career. Among other awards, he was honored by Paine College with the Alumni Achievement Award, the President's Award, and the Presidential Citation. A teacher for many years, he was recognized as a member of the Outstanding Educators of America.

Woodie was born on 27 August 1935 in New York City. He is married to the former Jennie (Kim) Tolson, a native of Worcester, Massachusetts. She attended Clark University in Worcester, and holds degrees from Howard Community College and Towson University. An elementary school teacher, Mrs. White was honored as the 1992 "Teacher of the Year" by the Springfield, Illinois School District. The Whites have four daughters: Kimberly Yvette, Hope Angela, Valerie Elizabeth, and Sharon Denise, and one son, Bryan Michael.

Woodie graduated from the DeWitt Clinton High School in the West Bronx in NYC in 1953 and from Paine College in Augusta, Georgia in 1958. He earned an S.T.B. (Bachelor of Sacred Theology) from Boston University School of Theology in 1961. While attending BU he served a pastorate in Worcester, Massachusetts. He then became a Probationary Member of the Detroit Annual Conference and was appointed the Associate Pastor of the East Grand Boulevard Methodist Church in Detroit, and in 1963 became the Pastor. In 1967 he began two years as an Urban Missioner for the Conference work in Metropolitan Detroit.

When the United Methodist Church established a General Commission on Religion and Race in 1968, Rev. White became its first General Secretary, serving in that capacity until 1984. The North Central Jurisdictional Conference of the U.M. Church elected him Bishop in 1984 and assigned him to the Illinois Area, which he served 1984-1992. In 1992 Bishop White was assigned to the Indiana Area, from which he retired on 1 September 2004.

In addition to professional honors, Bishop White was on a four-person task force to examine racism and race relations in Australia and New Zealand for the Committee to Combat Racism of the World Council of Churches. He participated in preaching missions in Chile, Argentina, and Brazil. He has served as part-time faculty at Wesley Theological Seminary and at Howard University School of Religion. He is currently the bishop-in-residence at Candler School of Theology. He has written extensively for denominational and ecumenical periodicals, and is coauthor of Racial Transition in the Church, Confessions of a Prairie Pilgrim, and Conversations of the Heart.

In retirement, Bishop White serves as Bishop-In-Residence at the Candler School of Theology, Emory University in Atlanta, Georgia.

In the summer of 1975, he helped start the black Athens Voice newspaper and upon graduation from law school in 1978, published A Story Untold: Black Men and Women in Athens History. Thurmond returned to Athens to practice law and took an active role in civic affairs. In 1986, he became the first African American to be elected to the Georgia General Assembly from Clarke County since Reconstruction. In 1994, Governor Zell Miller selected Thurmond to head Georgia's transition from welfare to work. He became distinguished practitioner/lecturer at the University of Georgia's Carl Vinson Institute of Government. Thurmond became the first African American elected Georgia State Labor Commissioner in November 1998 and was re-elected in 2002 and in 2006.

As commissioner, he oversees some four thousand employees while serving 90,000 families. In addition to his professional pursuits, Thurmond chairs the Martin Luther King, Jr. Georgia State Holiday Commission, and serves on the board of curators of the Georgia Historical Society. He published a second book entitled, Freedom: An African American History of Georgia.

After administering National Science Foundation programs for several years, Dr. McBay became the first African American Dean of Students at the Massachusetts Institute of Technology in 1980. In 1990, she resigned from this position to become president of the Quality Education for Minorities Network.

Dr. Charles G. Larke is the son of Mr. and Mrs. Alvin Larke. He was born in Kathwood, South Carolina.

Larke is a graduate of Jefferson High School. He received a Bachelor of Science in Mathematics degree from Paine College in 1969 and a Masters of Education in Administration from the University of South Carolina in 1978. He also received a Doctor of Education Degree at the University of Georgia in 1987. He became the superintendent of Richmond County Public Schools on April 1, 1996.

Attorney Bell is the current President of the Washington Bar Association (Washington, D.C.) and was former Chairman of the Board of Trustees, Paine College (Augusta, Georgia).

After graduating from Paine, he matriculated and graduated from Howard University School of Law. Mr. Bell is a member of the Bar of the District of Columbia, the bar of the Supreme Court of the United States and bars of other federal courts across the country. He has a national civil law practice and is the founding principal in Bell Law Firm, Washington, D.C. He is a frequent speaker to members of various local and national groups concerning trial and civil rights issues. Mr. Bell has been lead counsel in several landmark equal pay and Title IX cases, including winning the first jury verdict under Title IX in the country.